Newtown City Hockey Club is the largest hockey club in Victoria outside the Melbourne Metropolitan area. With over 350 members and 20 teams, the Club offers the opportunity for people to play hockey at whatever level they choose.

The Club welcomes players of any age, and any level of skill or experience.  New members are welcome at any time of the year, as there are teams playing in both winter and summer seasons.

If you are new to hockey, or haven’t played for a while, you could start with one of these options:

New members are welcome to try one of these first, before deciding whether to join the Club.

If you have decided that you would like to join the Club, we have teams for boys and girls from 3 to 16 (turning 17) and teams for senior men and women.

Costs to play include Hockey Victoria membership fees, and fees to play in a team or a program. All players must register in order to be placed in a team.

Register online at home or come along to Registration Day on February 18.

Equipment is available for loan to participants in the Hookin2Hockey program. Junior equipment packs are available for sale through the club.

Uniform is required for teams competing in the Hockey Geelong competition, but is not required for U6 Joeys, Kookas and Saturday Social players.

Uniform and equipment information can be found here…..

Team training for the winter season is conducted at Lloyd Reserve, Newtown for the U8 and U10 teams, or at Stead Park, Corio for the U12, U14, U17 and senior men and women. All players are encouraged to attend regularly. Training is not conducted during the summer season.

Play Hockey with Us – Anyone Can Play

Hockey is a great sport for the whole family, and Hookin2Hockey and Stick2Hockey programs are an excellent way to make new friends and to start a lifelong love of hockey.

The Stick2Hockey program aims to provide a bridge between Hookin2Hockey and participation in one of the Newtown Hockey Club teams which compete in the Hockey Geelong competitions. The program is suitable for children who may have learnt some hockey skills but are still learning the strategies of the game and developing skills.

The 8 week Stick2Hockey program is open to boys or girls aged 5 to 12, providing an opportunity to play hockey games, and continue developing skills and learning game strategies. The program is flexible and relaxed, with the main emphasis on having fun and continuing to develop skills. Modified game formats are used to foster teamwork and develop confidence for the participants. Games are played on a smaller field, with 5 to 7 players per team, so everyone is involved. There is no formal competition, but players will be grouped into teams to play games and learn further skills. Bring a friend and double the fun.

It is not compulsory to participate in a Hookin2Hockey program before joining the Stick2Hockey games.

Uniform is not required, but may be purchased through the club if desired. Equipment (stick and ball) is available for loan to participants if required. Each child should have a mouthguard and a pair of shinguards.

At the end of the program, players may choose to progress to one of the club competition teams, or return for a further Stick2Hockey program. 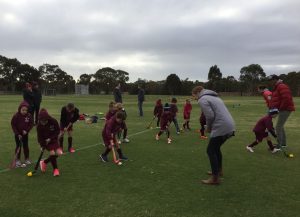 Having Fun with Hockey

We have teams for players from U to U17 junior, plus Senior, Masters and Friday Family. Beginners are welcome.

The early finish to the 2021 winter hockey season and the ongoing COVID restrictions give us a slightly longer break than normal between the end of the winter season and the start of the summer season. But this gives us a great opportunity to encourage others to #HaveaGo at Hockey.

The summer hockey season will begin on November 8 (COVID permitting), with teams available for players of all ages, all genders and all levels of experience (recent or otherwise). Games are midweek, so you can combine having a go at hockey with continuing to play your normal weekend summer sport.

With costs to play even lower than usual, relaxed uniform rules and a social atmosphere for the games, summer is a great time to #HaveAGo at hockey. Check the details here.

Boys and girls aged 5 to 12 can also #HaveAGo by joining a Hookin2Hockey program to learn the basic skills of hockey and strategies of the game. This is a great way to develop confidence and to make new friends.  The next program will begin on Thursday October 14, 4.30 pm at Lloyd Reserve, Windsor Rd, Newtown (opposite Balyang Sanctuary).

Summer hockey is also a great time to start a journey as a team coach or umpire, and we are always looking for help in these areas.

We are happy to welcome new members at any time of the year, and now is the ideal time to find out more and try out the game. Why not give us a call. Round up your friends to come along too. 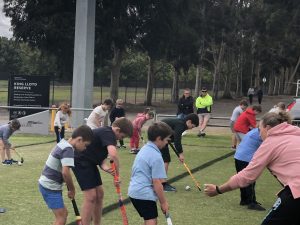 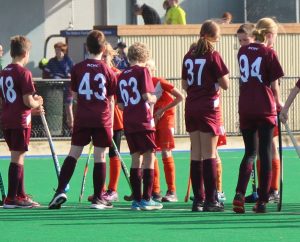 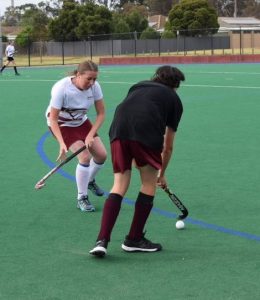 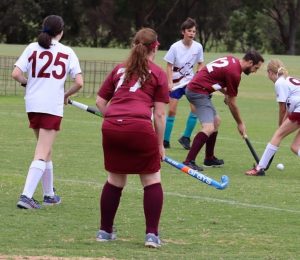 The Under 6 Joeys players enjoyed their game of ‘Keepings Off’, and showed some great passing skills before running to the next space to create the next option.

A ‘Parents and Kids’ game initially pitted the Wilson family against the rest, with some new players joining both teams as the game started. There were some great examples of passing, moving to space and recognition of the best option for passing to team mates. Firm passes kept the play moving and there were many forays into the attacking zones. Well done to all.

Newtown Strikers continue to impress each week, with their strong passing and great support for team mates. A good understanding of positioning and attacking strategies is always a feature.

What a fantastic effort by Newtown Spirit! After a 0-9 scoreline between these two teams in Round 1, this game showed how much the Spirit team and players have improved. With great attention to the team’s game strategies and a focus on persistence, the Spirit team was able to defend very well and deflect the Strikers attacks. Better use of the width of the field and passes directed to team mates saw Newtown Spirit create some promising attacks. Circle entries increased and there were some opportunities to score which didn’t quite work out but not because of a lack of effort.

Midfield work from Poppy and Ved was well supported by Albie and Maia with Hamish, Lucy and Ellie in good position to move the ball forward. When the ball did enter the Spirit defensive zone, Pat, Lilly and Eliza were steadfast and strong, denying Strikers the clear shot at goal.

Strikers were a bit rusty after the lockdown break. After some initial pressure they were very static off the ball and didn’t create many opportunities. Strikers were first to score but Kardinia were quick to equalise and then took the lead. With 15 minutes to go Strikers found a last burst of energy and started putting together some lovely passes down the field. They were rewarded with a goal to bring the scores equal. Unfortunately there wasn’t enough time for them to find a winning goal but during the last burst of play the team looked more like their usual selves.

A lovely bit of weather for our yet again return to hockey weekend. It was again a tough week with all the kids showing a bit of the energy zap from a on again off again nature of a COVID conditions hockey season. We were back to the country footy setup, with cars surrounding the ground, and parents with hands hovering over their horns.

We were up against a much improved Geelong Jaguars team this week, seeing how they have developed over the season, shows there are some strong competitions to come in future seasons.

Despite the low energy levels, we still managed some nice ball movement this week, again moving the ball out wide to our leading wings Ivy, Jett, and Michael who were making great position. Some very nice calling by our players, and it was very pleasing to see these calls being honored, and players passing the ball, rather than trying to get around opponents. This enabled those players to then run on and then receive the ball back again.

This style of play saw us go into attack on many occasions, by allowing our midfielders of Zac, Valentina, and Matilda get some space, and get a few short corners through some clever work inside the attacking D.

The improved ball movement from the Jags, was keeping our midfield busy, having to run back and defend, which on balance they did very well. Kashvi, Audrey and Maia rotating through the full back positions, providing some strong defence, with Will, Oliver and Charlotte in great support, rebounding the Jaguars attacks.

A highlight of this weekend’s game was to see Kashvi come out of the defensive 25 to meet a breakaway Jags forward, making the Jags forward pass off the ball, and then seeing Kashvi sprint back to help defend the D and rebound the ball out wide, well done Kashvi!

Pollyanna was again our goalie this week, and after doing some wonderful late game saving stops, including one off her stick, lead the Spirit team in the three cheers for the opposition and the umpires, well done Pol!

A very strong Torquay attack kept Hamish very busy in the goals. He was well supported by Liam, Kayla, Surry and other Newtown Spirit defenders. Newtown Spirit did well against a team that had double the male players.

Tilly, Lachlan and Lara worked hard to get the ball into the Newtown goals, but it didn’t quite get there. Great game to watch and great to see everyone back on the field!

So nice to see the kids playing again. Strikers worked well as a team today with a quick first goal by Eoin, supported by Ado to start the game well.

Great defence by Leo and Anya kept the team in attack mode, allowing Strikers to score two more goals by Anya and Kye. Kardinia held their defence well in the second half, and one last goal by Nate from a penalty corner sealed the deal for a 4-0 win for Strikers.

The Spirit side began the match a little scratchy, over possessing the ball and trying to go through defenders. We conceded a goal early but soon after regained some structured play, passing around defenders and using the wings more. We dominated possession in the second half and created numerous scoring chances with strong forward pressure
supported by Tom, Oskar and Oliver across the half line, and finished with 3 team goals. Let’s hope we are able to finish out the season and continue our good form.

Up against the top team this week, and with a 0-4 result in our last encounter, we were hopeful that the recent addition of some younger players would provide us with some attacking advantages. Strikers began well, with the midfield lineup of Andie, Tash and Hannah putting plenty of obstacles in the way of the Saints attackers. Beth and Hillary backed up well and pressured any who slipped through the first line of defence. Saints scored first with a nice deflection off a short corner.

But Newtown were not deterred, and continued to work hard. Great passing to forwards using the space well and showing great ball control saw Newtown create a number of attacks of their own and put some pressure on the Saints defence, earning a number of short corners. Grace, Charlie, Emily and Gemma received the ball from defence and controlled it well to advance. Peta, Emma and Audrey teamed well, winning possession and distributing the ball to players moving into good space in attack.

A penalty stroke defended, denied Saints a further goal, but it looked as if Saints might claim the win. However, another advance into the goal circle in the last minutes of the game saw Peta score, earning a well deserved draw for Strikers. Well done all!